The weather was beautiful all day Thursday with temperatures in the mid 70’s.  Dicky Wilson and Eric McMillian started the safety tech inspections Wednesday, as many arrived early to get their pit spots set up, and continued throughout the day Thursday.  Thank you to the GSKA workers and the entire GSKA team for a well-run event!  I also want to thank Todd Shearin for making it exciting calling the races and a beautiful rendition of our National Anthem Saturday.  Also, thank you to Aubree McClellan for leading us in the National Anthem Friday.  A special thanks to Eric McMillian for his help throughout the weekend.  Thank you to all the Vintage Karters with 89 entries participating at this event.

After a round of safety tech inspections Thursday morning, the track was opened for open practice at 9:30.  We started with open practice for all senior drivers (40 minute session with a max of 10 karts on the track at a time). The junior drivers (9 entries) were then allotted a (10) minute practice session followed again by the senior drivers.  We repeated this order throughout the day and closed the track for practice at 5:30 pm.  I am very encouraged by the number of entries in the junior class as they represent the future of our sport.

Friday morning rain was forecasted and they were correct.  From 8:00 to 9:30 it was a torrential downpour followed by steady drizzle till 2:00 pm.  We worked over an hour to get the track dry with a shop vacuum and several blowers. After getting the track reasonably dry, we opened it for practice (approx. 45 minutes) to ensure the track was dry enough for competitive action.  We then conducted our driver’s meeting including a brief devotional recognizing Mike Adkins, Pearle Gamble, and Lou Smiley who all passed since December of 2020.  We were able to get the first heat races started by 4:00 pm.  We had 20 classes represented and by grouping some of the classes together we were able to run all classes in 13 groups.  We completed all but a few of our 1st heats when light rain delayed the program again.  We called a quick drivers meeting on the grid asking the drivers if they want to dry the track and continue with most of the 2nd round of demonstration heat races under the lights or shut down for the day and pick-up on Saturday.  The overwhelming majority wanted to continue into the night so we dried the track again and did just that.  All heat races went smoothly. We completed all of the 2nd heat races for the day about 9:00 pm and proceeded with the banquet.

We all enjoyed a great finger food buffet prepared and served by Vicki & Glenn Forsyth in the concession/registration building and pavilion area.  In honor of Mike Adkins, Pearle Gamble, and Lou Smiley, Bob Barthelemy acknowledged that “In memory of” plaques will be placed on the walls of the concession building.

Romero Llamas and his team of judges got the kart show judging activity going at 9:00 a.m. Saturday morning on the front straight.  The Kart Show awards were presented a little after 10:00.  We recognized Pete Lotz as the furthest traveled and awarded the plaque to him (Belgium, Wisconsin).  We then conducted the 50/50 raffle presenting several GSKA & VKA T-shirts and calendars.  The big money winner was Steve Mox, who graciously donated half of his winnings back to the VKA. David Luciani headed up the sale of 50/50 raffle tickets ($1220.00) a record high for our event.  We then opened the track for 30 minutes of practice.  We called a quick drivers meeting, prayed, and Todd Shearin sang the National Anthem and we started the third round of heat races before lunch.  We completed the third round of heat races before 2:00 pm., then presented the awards for the demonstrations and finished by 3:00 p.m. 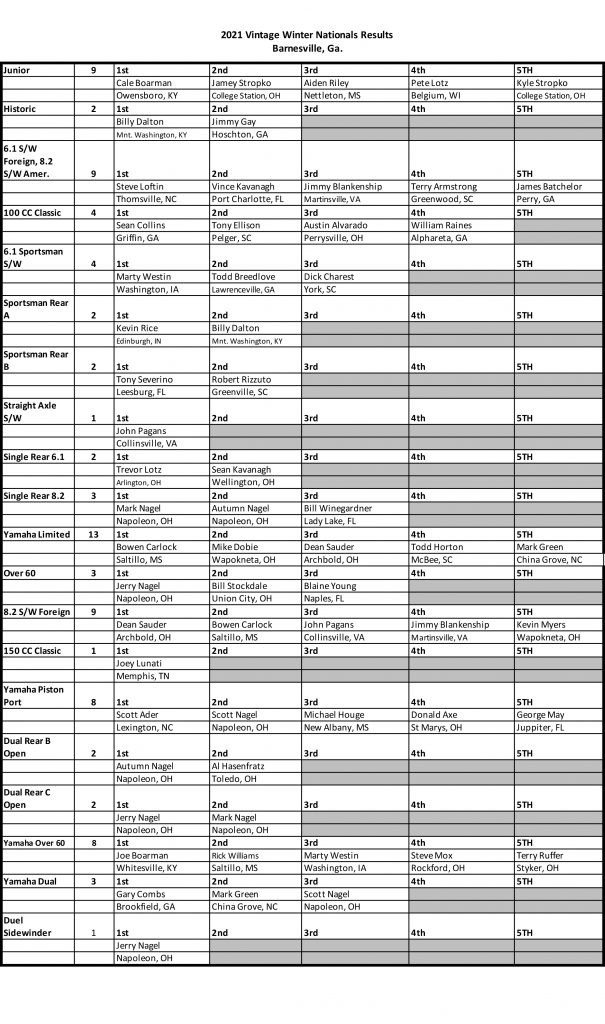