The Rolling Stones repeat the famous lyric “You can’t always get what you want, but if you try sometimes, you just might find, you get what you need”.  I have no idea what the rest of the imagery in that song is meant to convey, but I have often found that lyric to ring true.

On Saturday October 9, 2021, the NE Region closed out their 2021 season with the Dessert Nationals at Sandy Hook Speedway in Street, MD.  Originally scheduled to be a two-day, Saturday/Sunday event, by mid-week we found ourselves confronted by a high percentage chance of rain, particularly on Sunday.  As described in my previous event summaries, we have often adjusted an event’s schedule to run two Heats one day and one the next. In this instance, it was decided in advance to nix Sunday’s schedule entirely, and the event was condensed into a one day, two Heat affair. Fortunately, this was all negotiated by Thursday morning, so, for the most part, participants were able to adjust their schedules accordingly.  Bright and early Saturday morning, we rolled in, looking forward to what, for many of us, would be one last day of VKA vintage karting in 2021. 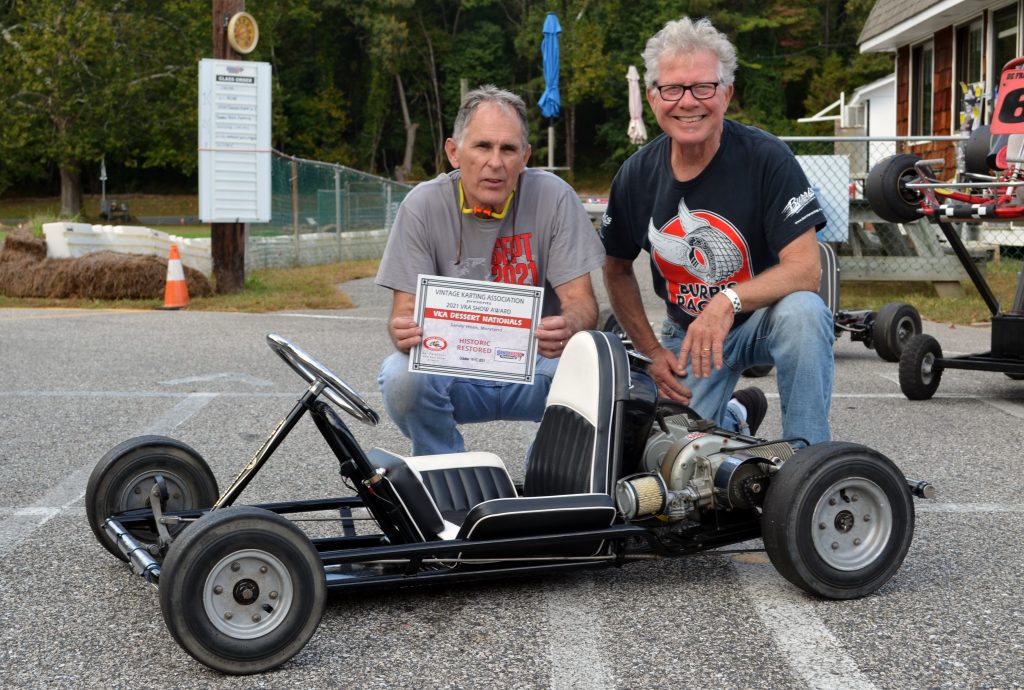 The schedule was, of course, very tight, and, as a result, there was not much “Tier Two” action available this time around.  We had our drivers’ meeting and got into practice right away.  We kept things rolling by alternating simply between rear engine karts and sidewinders, ten or fifteen minutes per session.  The Sandy Hook staff kept us on schedule giving us 1st, 2nd, Final Call announcements over the PA system.  I should say, “they made a valiant effort to keep us up to date,” but inevitably there was always at least one cantankerous kart motor that absolutely had to be revved heavenward just as the PA would click on.  Isn’t that always the way?  By the time we took our break for lunch, most of us had found sufficient time to get things shaken out, shook loose, or both!

The concession stand was open for business and had a tasty variety of burgers, dogs, and…  “walking tacos”???  Natalie and I make it a point to patronize the concession stands at the tracks we visit.  What I did not realize is that Natalie had been looking forward to having another Sandy Hook “Walking Taco.”  If you have not seen one of these, it is very clever:  They basically build a taco salad in a snack-size bag of Doritos.  You fork it right out of the bag as you walk away.  It cannot be “good” for you, but if it is only once a year…. Right?

After lunch we got right into the Heats, rapid fire. There were chains derailing (Rodrigo!) and ignition points wires fleeing the scene (mine!) as the drivers jockeyed for position out on the racecourse. Traction seemed to come and go, partially, I assume, because of the local club’s rubber being progressively scrubbed off the track surface, in conjunction with the track temperature fluctuating over the course of the afternoon.  Turn One changed the runningorder of more than one Heat, for me, for sure!  At this point, if this were a YouTube video, I would be gesturing towards wherever the Heat results will be posted in the final edit.

With the Heats completed in record time, we launched headlong into the Kart Show.  Honestly, the condensed schedule made it difficult to raise enthusiasm to get karts back out on the show field.  Many drivers opted to begin packing for their departure.  The karts that were displayed in the show represented our hardcore participants and we made the best of it!  Doug Jorgensen, Doug Tenney, and I judged the Show.  We decided to forego the “Past Champion” category (as many of these were, in fact, Past Champions) and instead evaluate them all head-to-head.  It does not get easier, even with a smaller field, especially when you might know the stories behind each kart or have detailed knowledge of the trials and tribulations of a particular restoration.  We aimed to keep it fun and fair, and I hope that our participants agree!  The winners, of course, are posted in the Show Results chart.

The Sandy Hook VKA Dessert Nationals were short and sweet this year.  Approaching the event, I wanted a big, two-scoop cone, and  I was lucky to enjoy a single scoop dish.  Next year I can dream about a three-scoop sundae can’t I?  Till next year!