I really hadn’t paid much attention to the weather reports as the weekend approached. Work had kept me busy, and I had barely cast my eyes on my Karting accoutrement since the previous event a month earlier. My boss was very kind to let me know on Wednesday afternoon that I was “probably going to get rained out.” At least I’ll still have some time off, I thought to myself. Sure enough, as soon as I dropped the selector lever into “Drive” early Thursday morning, the deluge started. Out of the corner of my eye, I could see a wince come across Natalie’s face. She wasn’t sure how I was going to react to this. I said, “What the hell” and proceeded to lug my tiny trailer out of the driveway and disembarked on our 4-hour trek northward.

This journey was a mixed bag, weatherwise, as we crossed multiple bands of rain, then clear, then rain again, coming down with varying intensity. We encountered some of the heaviest precipitation while we were within a half-hour of our destination, and the sky to the northwest was grim. It was at that point that I began to doubt whether there was going to be an event after all. As we neared the Avon exit, however, the rain subsided, and by the time we arrived at the track, efforts were already underway to squeegee off the track surface. Methods included blowers, dragged gangs of tires, and an amusing new class of entries: “Late-Model SUVs.” I never would have guessed that a GMC could negotiate the hairpin. Things were looking up!

There were a total of 77 entries at this event, and many of them were on site already on Thursday. I’m not sure if my expectations have been skewed by some of the low, Covid-era attendance numbers, but I was struck by the number of early arrivals. I quickly recognized the dayglo tees of Jerry, Marc, and Ben Nagle, who had travelled from NW Ohio and had arrived the night before. I eventually learned that Scott Klingler, Jesse James, Don Renton, and Vinny Rotole had also made pilgrimages from their own Midwestern locales to Central New York.

When the track was finally dry enough to be opened for practice, we took our turns in sessions arranged by basic kart type, i.e., Historic, Rear, and Sidewinder. There was little downtime and plenty of track time. The practice sessions cycled continuously, and this was extended right up to the 6pm noise ordinance cutoff. I’ve said it before: I like Thursday practice days.

Some of us have made it a tradition to get together for a meal on the town if we’re amongst the Thursday crowd. Once the track was closed for the evening, about a dozen of us headed down the road to the popular Italian restaurant, Fratelli’s, for some of their delicious fare. It’s fun to better get to know our karting friends away from the din of the track over good, local food and drink. In hindsight, I consumed too much of that local food and drink. Fried cauliflower chunks, each the size of tennis balls…a portion of chicken parmesan that should have been three meals…so worth it! Or was it? Friday morning came quickly. No time for regrets! Pass the antacids. LOL!

The standard event schedule enumerates morning practice and one heat on Friday afternoon, followed by a more abbreviated practice and two heats on Saturday. Weather forecasts and travel time considerations have prompted us at several recent events to vote on whether we’d prefer to do two heats on Friday and one on Saturday. The modified schedule has become a popular option, and, once again, the majority was in favor of front-loading the schedule.

There were 13 classes on the grid schedule, including some combined classes. Historic Rears and Sportsman Rear classes were especially well represented, a growing point of pride in the Northeast. Yamaha participation was strong, of course, with several dual engine entries, as well. A couple of foreign engine duals as well as a couple of four stroke entries were present, too.

One particularly interesting aspect of this event was the surprising number of Dual Engine Rear machines. There were 8! That’s right – Eight! Our guests from the Midwest were well represented in this category, many of those guys fielding seriously race prepped SAE frames. Several of these thoroughbreds had McCulloch motivation while others featured dual West Bent 820 propulsion. Notably, all eight of these karts finished the first heat, which is a special feat in itself! Their oscillating cacophony of pressure pulses, squealing tires, and general sense of barely controlled chaos produced a palette of sight and sound that was a delight to behold. Even with that kind of excitement on tap, we were able to roll through the first two heats without incident, and upon their completion we segued into the Kart Show and the traditional Avon “Pizza and Pop Party”.

The Kart Show was very well attended with about 60 karts flanking the Start/Finish line. This doesn’t top our previous Avon record, but it was, I believe, very respectable in this Covid era. I always encourage everybody to participate in the Kart Show and get their machines out there for everyone to appreciate, especially visiting spectators. Natalie, my amazingly supportive wife, helps to distribute the kart show entry forms and People’s Choice ballots, and checks in frequently to be sure that I stay on task. I usually end up serving as one of the Kart Show judges, and I typically seek to enlist two others, one of whom who is confident with Rear Engine stuff, and another who is more familiar with the sidewinders. On this occasion I was assisted by Paul Hunter and Skip Owen.

The challenge of picking any type of “Best” kart never gets easier, and there were so many great karts at Avon! It bears mentioning that two of those Dual Engine Rears posed a particular quandary for this trio of Kart Show judges. Both Vinny Rotole and Brian Santee had exceptional, yet philosophically different entries in the Rear Engine Modified class. Vinny’s was a very beautiful, very customized, strikingly red and black SAE. It featured a gorgeous pair of MC101s on Hegar mounts and beautifully embroidered leather upholstery. It was low and wide, with no shortage of hydraulic stopping power at all four corners. Vinny’s kart evoked images of Ferrari, Maserati, or Alpha Romeo.  Brian Santee’s 1965 Rupp Chaparral, on the other hand, was the analog of a COPO Camaro or something from Carol Shelby’s skunkworks. His machine sports dual MC91s and Hurst/Airheart brakes. Its metallic, piney green paint is complimented by the bright chrome of the steering hoop and the various polished aluminum accessories, as well as by that classic, pleated “Deluxe” Rupp upholstery. Both karts were exquisite in their own ways, but, as judges, we erred on the side of “Period Correctness.” Brian’s Rupp was a restored, factory race team muscle car, while Vinny’s was a retro-mod supercar. At least, that’s my excuse and I continue to struggle with it! The complete show results are published elsewhere in this report.

Saturday’s schedule was much the same as Friday’s and, again, we were able to complete the third heat without incident. The points were tallied, and the trophies and medals were awarded. Those who had long trips ahead of them got to work packing up their trucks and trailers, while others enjoyed some additional open track time.

Instead of repeating the podium results, which are available elsewhere in this issue, I’d rather acknowledge and thank the people whose efforts made this 12th Annual Vintage Karting Reunion possible. Scott Kneisel and Sam Polito are the promoting team for this VKA event and are the vintage liaisons at GVKC. Scott handles the clerical work, forms, class arrangement, and communication. Sam is responsible for the facility and grounds maintenance (track drying!) as well as safety inspections, and also helped out with flagging, as needed. Don Foley was our flagman, and John Salisbury was the First Turn Marshal.  Darla Frederick, out of sight in the timing tower, kept things rolling like a well-oiled machine. Al Gutberlet, the facility owner and GVKC President was courteous and accommodating, as always. VKA National Events Director, Karl Ginter, supplied the trophies. Maria DeFrancisco handled the 50/50 ticket sales. There are certainly others, unnamed here, who are deserving of our recognition and gratitude: the folks in the snack bar, as one example, come to mind. These events don’t organize and execute themselves.

This event was fun and exciting. The weather turned out to be exceptional and the turnout approached pre-covid numbers. There was a notable variety of karts on hand, and the competition was clean. It was great to meet new folks from out of the region, just as it was fun to see familiar faces. I’m glad I didn’t pay attention to Wednesday’s weather forecast. 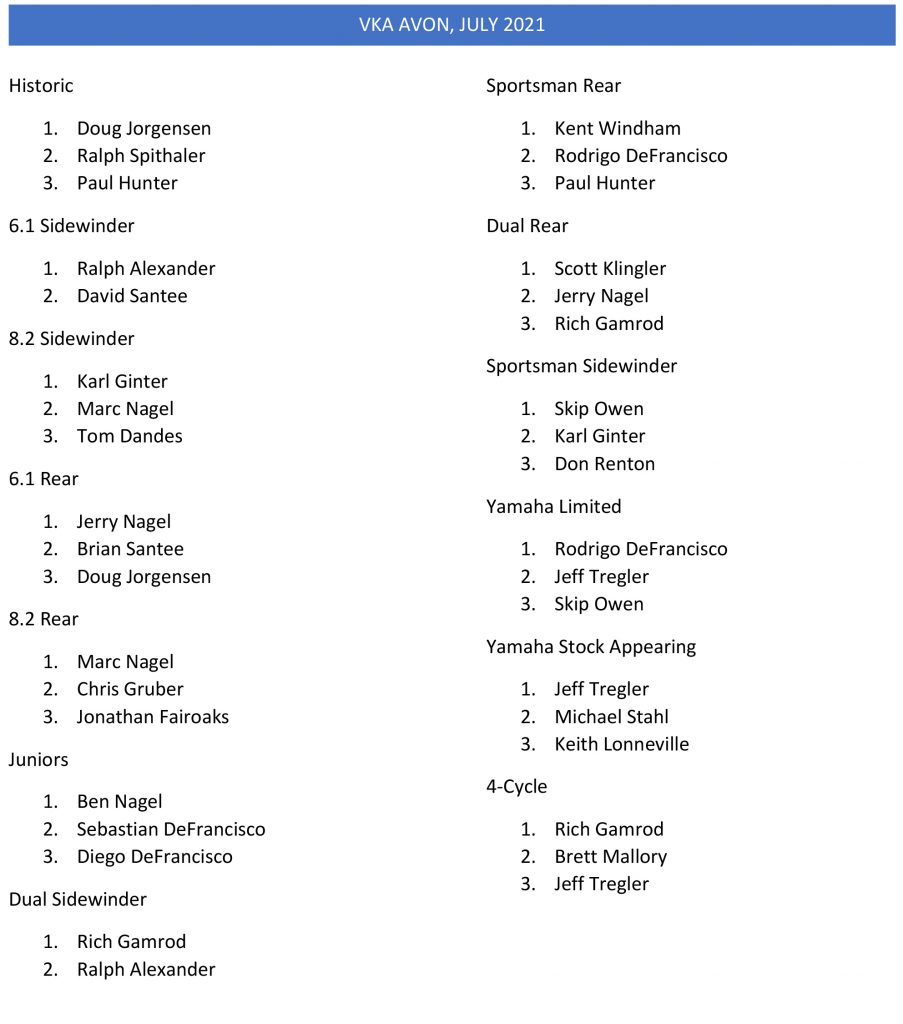